Is Your Life In His Hands? 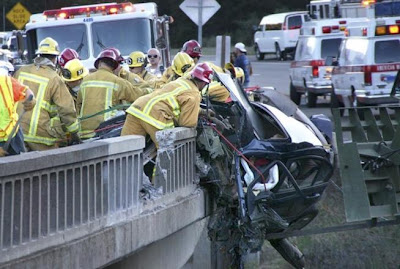 Family Rescued From Car Dangling Off Bridge: ABCNEWS.COM – Rescuers save a California mother and her two daughters.

Do you know that your life is in God’s hands? It’s hard to remember as you’re rushing to get out the door in the mornings. Between getting kids dressed, packing lunches and the diaper bag; you tend to forget that God is there. I wonder if that’s what Kelly was doing last Friday morning. As she headed out the door that morning, she had no idea that in less that an hour, her car would be dangling over a 100 foot drop, along with her two daughters, ages ten and ten months old.
Before she even got out of bed that morning, God knew what was going happen, her life as well as her daughters were in His hands. Because He had a plan, several divine interventions had taken place to save all of their lives. About the same time she was cruising down the interstate, troops of Army soldiers with construction vehicles were stuck in traffic within radio distance of her soon to be crash site. When the semi-truck hit her car, the truck careened over the bridge and into the ravine below, killing the driver. Moments after impact, her mangled car teetered on the edge of the bridge, with her feet dangling into nothing but air.
What makes this story so amazing is how God intervened with the Army Troops, and Rescue teams. Her infant daughter who was in the back seat made it out with only minor bumps and bruises. Within minutes of the crash, those soldiers had the equipment needed to keep her car from going over the edge and aided the rescue teams!
Does stories like this cause you to pause and thank God that your life is in His hands? No matter the trouble or issues that you are facing, remember that God has it all under control, your life is in His hands. Before you get out of bed in the morning, God is there and knows what lays ahead.
When I  seemingly hit a wall, I trust that God already knows and has a plan. Do you have question whether God is there? Or maybe, you struggle with trusting God? Share your thoughts!

3 thoughts on “Is Your Life In His Hands?”