Put Yourself in His Shoes 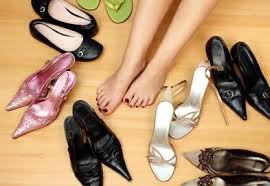 Ah, yes it’s Monday. Are you having a bad case of the Mondays? If so, come back tomorrow because today’s post is not about you and will likely make you squirm a bit. I’m talking about Marriage Monday, in which I like to try and post a thing or two about the twelve years of experience I’ve had in this area. My husband revealed something to me the other night during small group that made me realize he is actually very wise and sweet. Most of the time, I tend to think of him as a cowboy type of guy. Doesn’t say much, has a temper, shoots first, asks questions later. During our recent tragedy of losing a child, I could tell by Chris’ face that I was pretty much unbearable to be around. Let’s face it, extra hormones and being a woman is enough for a man to run for the hills (poor Chris).
While we were sitting in small group, we were discussing my least favorite subject, forgiveness, when Chris offered some profound insight into any given situation where forgiveness is necessary. He went on to say he puts himself in the other person’s shoes to gain understanding of their spiteful remarks, or vengeful attitude. Walking in another person’s shoes allows Chris to see why the other person is hurting and directing the pain or anger at him; and suddenly the words that were meant for war becomes an understanding. It’s followed by compassion and empathy (Note to self, begin teaching kids this perspective, maybe less fights will break out).

So the next time your husband is snippy, distant, crabby, or PMS’ing (yes men do PMS, but we’ll discuss that some other time, stay with me here), put yourself in his shoes, and move towards him with compassion and understanding. It will put out fires before they start or spark one that you both will be warmed by.

2 thoughts on “Put Yourself in His Shoes”

Leave a Reply to I'm NOT a VOLCANO! Cancel reply