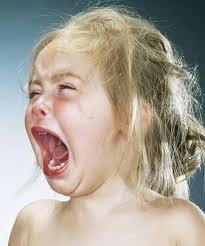 So now that it’s minus 3 degrees outside, my kids and daycare kids have gone half nutty within these four walls we call home. Did I mention I have three active children? Granted my oldest is in school, so I make up for her absence with daycare kiddos. Cole and Kailie, sometimes Sam and Bella, and only on Fridays Avery and Aspen. All of them are under the age of 5. Actually Bella is 7 but the rest are 4 and under. My two kiddos Elijah and Tori are 4 and 2. While I was attempting to recuperate from performing in The Gospel According to Scrooge all weekend, my loving husband held down the fort. He kept the kids entertained but somewhere along the way of building forts, surfing down the stairs, and playing the Wii, house rules and chores went out the window.
While I was busy sorting and putting away 18 loads of laundry, screaming erupted from the kitchen. My ever resourceful 2 year old figured out how to manipulate the fridge lock and was pulling a bag grapes out of the fridge while fighting off Cole and Elijah. After separating everyone into their respective corners and dividing up the grapes; the whining and screaming continued the rest of the day.
“Cole won’t play my game.”
“Tori is hitting me!”
“Elijah took my toys.”
“I don’t want to play with his bionicles, I want to play cars.”
Of course each sentence proclaimed out the mouth of these babes was elongated with tears and whines. The sound of discontent continued to repeat itself the rest of the day…SIGH…this volume and tone sensitive Mama was literally counting down the minutes to bedtime. And then it came, the daycare kids went home, and two hours later my kiddies were asleep in their beds. The sounds of heavy breathing and snores mixing with the sound of the heater. They were asleep and I was free to lay on the couch and stare at the ceiling listening to the sounds of sleep!
Any other Mama out there that is dealing with kids trapped inside have any ideas how to keep the peace besides crafts, playdoh, and threats? If so leave a comment or two that could be of use over this very long winter!

The Moms Together Podcast

Excuse the mess!! 🙂 My site is undergoing a much needed face lift. There’s a lot happening behind the scenes.