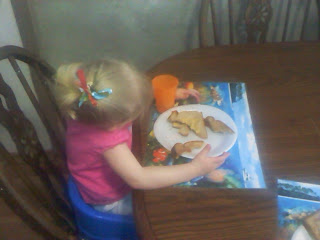 This is my youngest. She is a mini-version of me and quite frankly, I’m scared. You know that saying your mother used to vehemently tell you when you were younger and rebellious, when your mother would say, “I hope you have one just like you?” Well my mother topped everyone else (Thanks again Mom!), because I was stubborn, strong willed, snotty, and miss attitude, my mother would yell at me at least once a week, “I hope you have five just like you!”
Lucky for me, we are stopping at three children. Instead, I have all five rolled into one. That’s right, Tori, my youngest is two going on thirty and couldn’t be more different from her siblings. She picks a fight just to see if she can win. When she is told no, she see’s it as a challenge. If something isn’t done precisely how she wants, it’s tantrum city.
The other night, my husband was putting her to bed and she was not happy about it being bedtime. She told Daddy “NO” each time he said lights out. Then as if she were going to surrender, she asks for her sippy of water. Daddy complies. As soon as that door is closed, we hear a loud thump as she throws her sippy at the door. My husband turns and looks at me square in the eye, “She’s just like you!” before entering her bedroom to begin the nightly routine of establishing authority. 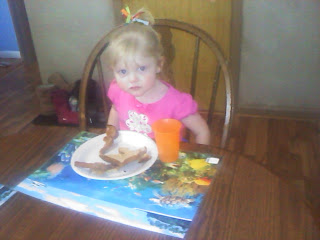 She never took a binky, or bottle. She doesn’t need sleep & it’s world war three at nap time. She’s left handed. She is smarter than her four year old brother and most seven year olds. She potty trains herself and wears either mittens or socks on her hands when she goes to bed. Oh and the strangest quirk yet, she will not eat her grilled cheese unless it’s grilled and then then pulled apart.
All I can tell you is that God doesn’t give us more than we can handle, so apparently with His help, I handle Tori, and raise her to be an obedient girl after God’s own heart. Maybe this is why I felt so strongly her middle name needed to be Grace; I need a lot of Grace parenting this one. Apparently, Chris and I are the parents He chose to raise this letter girl. He thinks we’ve got the unique traits and personalities. I’m not so sure. If anything, at least I know that I can rely on Him to give me insight, rest, and provision in raising my little girl.
Do you have a stubborn, strong willed child that throws you for a loop? Let me know!
www.herviewfromhome.com